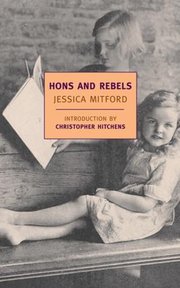 So this review is for the NYRB Classics Spotlight Series Tour and I’m so glad it motivated me to read Jessica Mitford’s wonderful memoir of growing up in such an eccentric and utterly charming family.

Many people know about the Mitfords, but if you don’t, here’s the brief run-down: Nancy the novelist wrote The Pursuit of Love and Love in a Cold Climate (both highly recommended), along with other novels; Diana married the leader of the British Union of Fascists; Unity was fascinated by Hitler and shot herself at the start of WW2; Jessica (‘Decca’) was the communist who lived in America most of her life; Deborah (‘Debo’) became the Duchess of Devonshire. The remaining siblings Pam and Tom didn’t acquire quite so much press.

The first half of Hons and Rebels details Jessica’s experiences growing up in an isolated country house, surrounded only by her family and educated at home. They made up their own language (Boudledidge) and games (Hure, Hare, Hure, Commencement, involving a lot of pinching), with many shared jokes and private slang, but at the same time, you sense the fierce competition between the sisters. As a teenager, Unity became entranced by the fascists, while Jessica immediately proclaimed her desire to go exactly the opposite way:

“Shouldn’t think of it. I hate the beastly Fascists. If you’re going to be one, I’m going to be a Communist, so there.”

and others in the family had more social ambitions:

The endless schoolroom talk to “What are we going to do when we grow up?” changed in tone. “I’m going to Germany to meet Hitler,” Boud announced. “I’m going to run away and be a Communist,” I countered. Debo stated confidently that she was going to marry a duke and become a duchess. “One day he’ll come along, The duke I love…” she murmured dreamily. 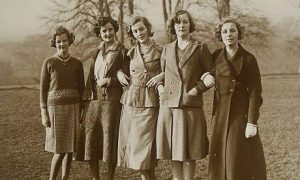 The tensions of the 1930s are here played out within one family, with Jessica running off to be a reporter’s assistant in the Spanish Civil War with her second cousin (a nephew of Churchill’s) while Unity was busy being pals with Hitler in Germany (Nancy had been part of the 1920s Bright Young People crowd, friends with Evelyn Waugh and others, but in the ’30s seemed to spend her time trying to calm down the excesses of her more political sisters). It makes for fascinating reading, to see such a unique and witty family caught up in these political conflicts in their own way, dividing the sitting room Unity and Jessica shared down the middle, with fascist propaganda on one side and communist on the other.

Sometimes we would barricade with chairs and stage pitched battles, throwing books and records until Nanny came to tell us to stop the noise.

Yet Jessica felt trapped in this life, knowing she couldn’t go on to college because she hadn’t gone to a proper school and feeling unable to do anything good for the cause she was beginning to follow (or even find family support for her ideals):

It was as though I were a figurine travelling inside one of those little glass spheres in which an artificial snowstorm arises when the sphere is shaken — and no matter where I was, in a train, a boat, a foreign hotel, there was no escape outside the glass. Invisible boundaries kept me boxed in from the real life of other people going on all around…

The Mitford sisters often seem to be involved in their own myth making, but as the outsider (even her father and mother traveled to Germany before the war to meet Hitler), Jessica offers a hilarious and enthralling view of her family and early married life. This is one of the best books I’ve read this year and if you’re at all interested in the Mitfords or what Britain was like before WW2, read it, read it!

14 thoughts on “Review: Hons and Rebels by Jessica Mitford”

Follow a few of my favourite books on WordPress.com

Exploring my intermittent love of Proust and lots of other books...

The Chronicles of a Book Addict

reading and smelling the roses

before I read the middle

Your online source for Jane Austen & her legacy

Celebrating the pleasures of a 21st century bookworm

Linking the World in Six Degrees of Fiction

Bookish thoughts from a woman of endless curiousity